Everything I Know About Masterlock Combination Locks
By: MMDeveloper;
Last Updated: 2017/09/13

There are probably some of the more prevelant combination locks out there. They are very popular with locker type spaces. Luckily, bypassing and decoding these locks is fairly easy. I did not invent any of these methods.


What Is A Combo Lock

A combination lock is a lock that utilizes a combination of numbers, instead of a key, to open. Some locks allow you to set your own combination while others do not. The combination can consist of letters or numbers, can be a single wheel or a series of wheels

Different styles of combination locks require different techniques to decode, some can easily be bypassed as well. Bypassing generally involves sticking a tool in a precise location and lifting a metal mechanism out of the way that allows the shackle to open. Decoding is another method that involves using a special tool to location cutouts (gates) on the combo wheels. Bypassing will get the lock open, decoding will expose the combination.

Decoding involves using thin pieces of metal to press against the edges of the wheels, inside the lock, looking for the gates cut into them. Once all of the gates have been located, you can determine the combination. If a lock has been opened via decoding, the combination IS changeable, provided you have a combo lock that allows user-changeable combinations. This process can be a little time consuming, averaging 1 minute per wheel.

Bypassing is generally reserved for a certain style of Masterlock Combo locks. These locks take on the typical padlock form and have 4 combination wheels on the bottom. Bypassing works very well on the older style locks and is a little more difficult on the newer versions; it still works, you just need thinner tools. These tools are inserted into the lock and used to interact with the locking mechanism that holds the shackle down. Once lifted, the shackle will open, as if the correct combination was entered. When a bypass has been done, you cannot reset the combination on resettable locks. This can only be done when the correct combination is in place. This process can be done in seconds. 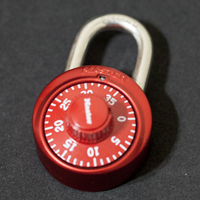 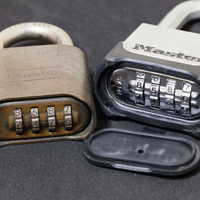 Inside a Four Wheel Lock

Bypassing these locks is fairly simple. The idea is to find a rigid tool that is thin enough to slide between one of the wheels and the lock body (Illustration ::0). All I use is a 0.015" (or thinner) hook, somewhat low profile. You'll want to orient the lock so the numbers are facing you properly, and you want the bypass tool to be on the upper half of the wheel. Stick the lock about 1" into the lock while lifting the pick up and down (using the lock body opening as the fulcrum) until you hang up on something inside. This is the pawl that's holding the shackle down.

Push the shackle inward to release tension on the pawl and use your pick to slightly lift up on the pawl. It will take a little pressure on the pick, but it won't move very far. Once lifted, release the shackle and it should pop open. Bypassing the lock will only open the lock, you can NOT change the combination when the lock is in this scenario. To retrieve and change the combination, you must use a decoding method. 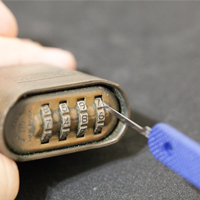 Decoding is a slightly more delicate process. You have to make a custom decoding tool (if you can call it that). You can make one out of a core shim or those thin metal strips in security tags. The thickness generally needs to be 0.004" or thinner; I use a 0.002" core shim. You will want to cut the core shim until it's about 1/16" wide. You can use the outer shell of the lock body as a gauge. I cut the shim until it is as wide as the outer shell is thick. I will then use a pair of tweezers to put a slight bend in the tip of the strip.

The gate will always snag on the metal when the wheel is between numbers (half marks). When the gate is facing the bottom of the lock (where the wheels poke out), remove the shim and roll the wheel downward to the next number (if it was between 3 and 4, roll it to 4). Once you do that, roll the wheel two more numbers in the same direction. The number that is aligned with the exterior mark is the correct number for that wheel. Repeat this process for each wheel. Once all four wheels have been decoded, push the shackle down and let it spring back up, it should open.

When decoding, the metal will also snag on the flat side of the wheel mechanism, so when it snags, you might want to turn the wheel in either direction to see just how much it snags the metal. This is where "getting the feel for it" makes this process easier.

This alternative method illustrated by the Reddit user /u/Speculator