The pin-in-pin (hereby known as PiP) is found in upper tier dimple locks such as Mul-T-Lock. It consists of a large key pin with a hole drilled through the center of it. Inside this hole is a smaller pin, hence the name pin-in-pin.

PiP key pins (Illustration ::0) are pretty straight forward in function. They consist of an inner and outer key pin in which the inner pin is literally inside of the outer pin. These usually have no security features on them.

PiP driver pins (Illustration ::1) are also pretty straight forward in function. They consist of an inner and outer driver pin in which the inner pin is literally inside of the outer pin. These usually have no security features on them as well. That last statement generally doesn't apply to Mul-T-Lock brand PiP locks. Usually there are a few spooled pins in there to add a little more difficulty. 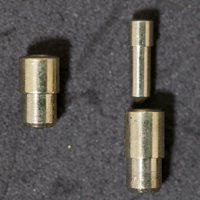 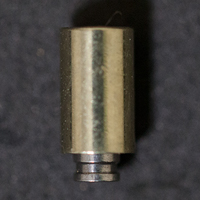 Detecting PiP is pretty easy. I've never seen a lock that only had PiP in some chambers and not others, it's always all or nothing. You can take any pick and manipulate the first pin in the lock. Push upward on the outermost edge of the key pin and lift. You should see a smaller pin in the middle of the outer pin, still in the downward position.

Defeating PiP, the philosophy is simple, but in practice can be very tricky, even with high-end specialized picks. Without going into great detail here on how to pick dimple locks, defeating PiP generally consists of lifting the outer pin (and outer pin ONLY) to shear, and THEN lifting the inner pin (and inner pin ONLY) to shear. Keep in mind that sometimes they may have security features, such as spooling.

For practice with PiP locks, Mul-T-Lock is the most popular. If you want to start with something more simple, search for "Kenaurd" dimple locks on e-Bay. These are pin-in-pin with zero security features and is very easy to open. They are great introductory dimple locks as well. Mul-T-Lock makes some PiP locks but not only are they made very well with great tolerances, they also have some security features making them difficult to pick, for most.