Everything I Know About Serrated Pins By: MMDeveloper;
Last Updated: 2017/07/24

The serrated pin is the upper tier security pin. You typically don't find these in cheap locks as they are more expensive to mass produce. A serrated pin is like a standard pin with several channels cut around the pin, like several spooled sections.

Serrated pins (Illustration ::0) are some of the least commonly found security pins, mainly due to their manufacturing costs. They offer a higher degree of pick resistance, especially when accompanied with threaded chambers (Illustration ::1). While picking, the serrations on the pin will catch on the shear line, giving you a false notion of having been set to shear. The more serrations, the more times it will try and fool you.

An alternative version of the serrated pin is the serrated Spool pin (Illustration ::2). I have only ever seen these in American locks. They combine the pick resistance of a serrated pin AND a spool pin and can be a little tricky if you haven't yet developed a feel for it.

Another type of serrated pin is a serrated key pin. These are pretty rare and I have only ever seen them in American locks (plus their knockoffs) (Illustration ::3). 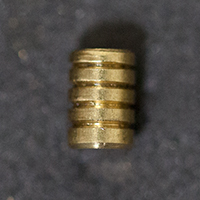 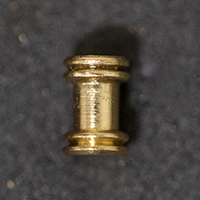 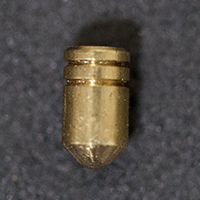 Detecting a serrated pin is not so straight forward. These require a very light touch. If you don't know that a lock has serrated pins, it may take some experimenting to discover them by intentionally oversetting pins and counting how many clicks you hear/feel. Given proper tension, a serrated pin will always give you at least 2 clicks before you hit a shear line. The amount of lifting force to pass the first serration will also be the right amount to pass the second serration. That second click is a red flag that serrations are present. A serrated pin will also provide a small amount of counter rotation, like a spool, but it will be VERY subtle.

Defeating a serrations is similar to defeating a spool pin. Typically you let off on the tension a very tiny amount, since the depth of a serration is not as deep as the depth of a spool. What I like to do is, instead of letting the release of tension set the pin, I like to just apply more lifting force and keep my tension constant. When you hit the shear line, the plug will rotate enough that you won't continue to lift the pin.

Another way to know that a serrated pin has been defeated is the sound of the clicks. Generally, a serration will provide "X" amount of plug rotation and a certain pitch for a sound, a shear line will provide "X+0.5" plug rotation and a very slightly lower pitched sound. The differences between the plug rotations are almost immeasurable by fingertip, but the sound is noticeable; unless you are tone deaf, or have changed the amount of tension you were using on that pin.

A serrated spool is really no different. First you'd treat it like you would a serrated pin, and once you get past the serration it will then act like a spool. Once you're past the spool, it will act like a serrated again; so it's really not much more difficult. Sometimes if you think you've lifted all pins to shear and the lock still doesn't open, you may have to intentionally overset one pin at a time, allowing it to fall back down each time, to test for serrations or other security features.